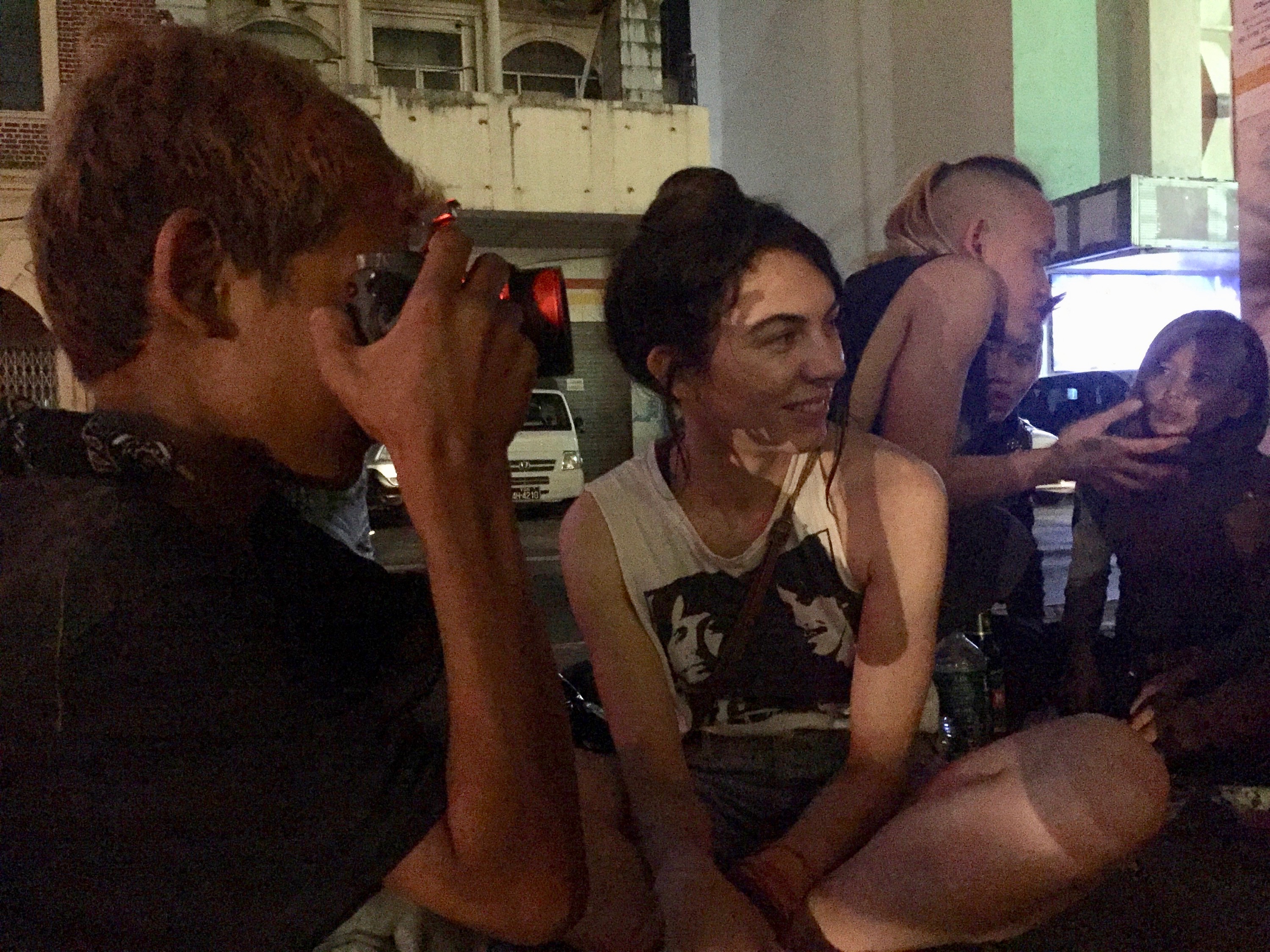 To read part I of The CASSANDRA project: Maja Holzinger, click here.

In ancient Greek mythology Cassandra was cursed by the god of reason and logic, Apollo, to always speak the truth and never be believed. She represents intuition, and her myth reflects western society’s devaluation of divine feminine knowledge.

The CASSANDRA Project is intended as a space for Cassandras in our community to speak their truth. It’s a space for female-identifying myth-busters to speak out and up for women, LGBTQ, and other marginalized peoples. While there are many columns and blogs that focus on women whose success is defined by the patriarchal values of wealth, power and prestige within the system, this column is dedicated to celebrating women for just being, a political act in and of itself in today’s world. It is a space to share the ways in which female-identifying people have maintained their relationship to the divine feminine forces of intuition and creativity outside the status quo, and in spite of male dominated industries and patriarchal systems.

This column is about, for and dedicated to all of the daughters of the witches you didn’t burn. 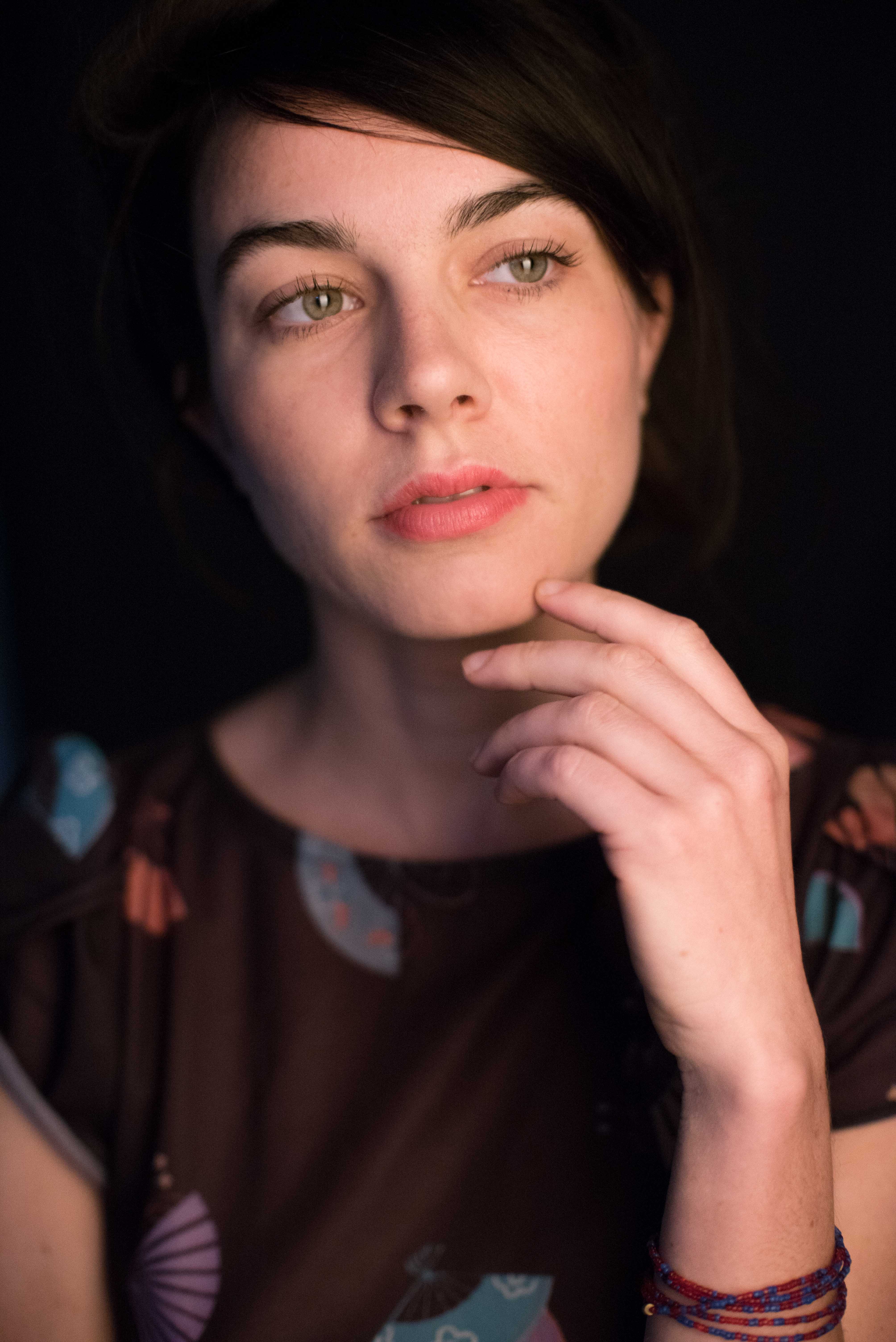 Maja is a filmmaker hailing from Sopot, Poland. She has directed several short films and is currently working on her first feature #streetpunxofyangon.

Natural Habitat: The seaside of the Baltic drying laundry in the salty air.

What is your feminist killjoy?

Sometimes, when I’m the only woman working with two or more men I have observed that men seek connection and eye contact with other men and skip over me. They probably do this unconsciously as they feel more comfortable with each other. But for me, it’s almost physically painful to be ignored. First, because I should be involved as a respected collaborator in the discussion, and then, because when I have to call it out, I feel like I can be seen as weak. Being ignored can be triggering for many women, because they’ve experienced it so much. You don’t want to be in that position. It is vulnerable because it immediately draws attention to the fact that you could be insecure or don’t feel validated. Needing to bring that up is something I wish I never had to deal with in a creative space.

What is your best tactic for dealing with mansplaining?

Hmm… I don’t have a great practice for dealing with that yet!

What are queer/feminist topics that you explore in your creative work?

My feature, #streetpunxofyangon, is a film about a female filmmaker who is on a quest of discovering her identity as an artist. It departs from the expectations about a stereotypical woman’s narrative. It has no ties to her family life, relationships, search for love, or maternal instincts. It is simply about her identity as an artist, spiritual journey, and realization that comes with that journey. This is a way the film is feminist.

There is another aspect. She has to navigate through the male egos that she engages with in the process of making her film without loosing her integrity. I think this film will shine light into the subtleties of feminism within the dynamics of creative collaborations with men who try and take over, project their own visions, and loose trust. So far filmmaking is still male dominated.

The movie is modeled on the real life experience between me and my male collaborator – an incredible creative partner, who is a brave man, exposing his own vulnerability, and putting effort into shifting predominant male-female dynamics on set. In the film a woman decides to quit her high school teaching job and struggles to figure out the movie she wants to shoot in Myanmar while she pairs with this amateur producer, who is a man. Their relationship is neither sexual nor romantic. Both parties must navigate through a lot of residual leftover layers of the unequal gender dynamics that dominate film making.

In our process, we both had to constantly address our egos. In the script we investigate that dynamic,  dramatize and exaggerate many of the issues that we came up against. It’s been a bonding and healing experience as I work with men who are conscious, ready to reexamine their motivations and simultaneously have understanding towards mine. I also acknowledge that it is brave for a male collaborator to have the openness to explore this sensitive and personal topic on a meta level within the very work we create. All the struggles that came up within our dynamic provided juicy and time-relevant material for the narrative. 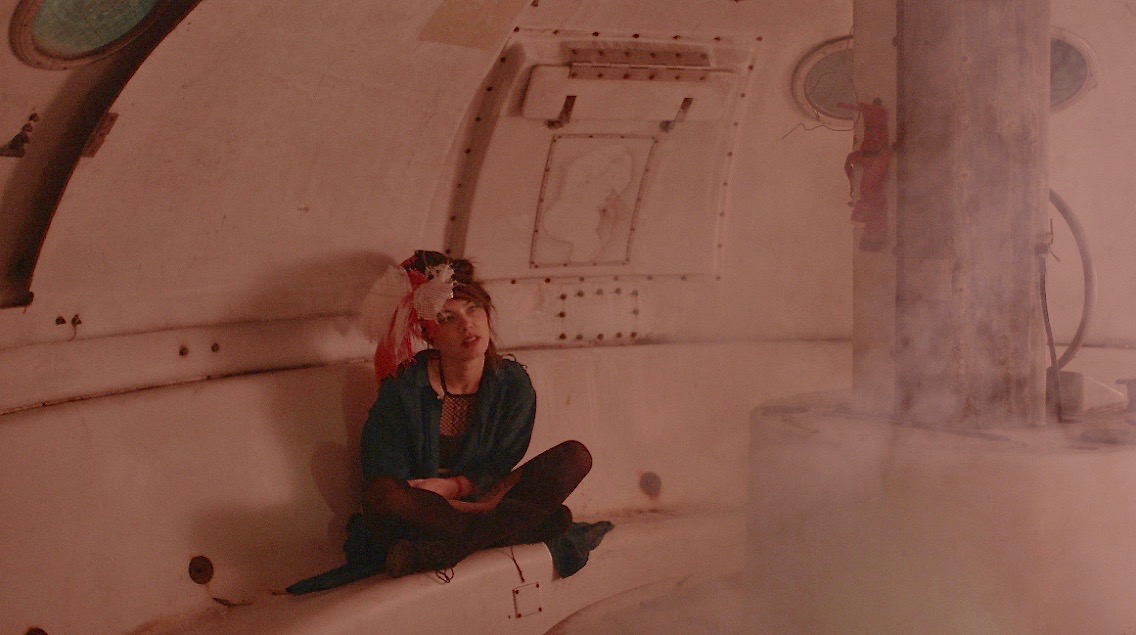 What is the source of your creativity?

For me personally, I believe the only story I can tell with full conviction is my own. No matter how I disguise the characters – it could be an old midwestern man –  it’s still a version of myself.

My major inspiration comes from what I am experiencing and processing. For example, I’m not able to make a movie about growing up in a small town in Louisiana as a queer person because that’s not my story. I can’t tell that one. I can tell the story of someone being obsessed with some dream and going full on against odds toward the goal only to realize the journey itself is the value. 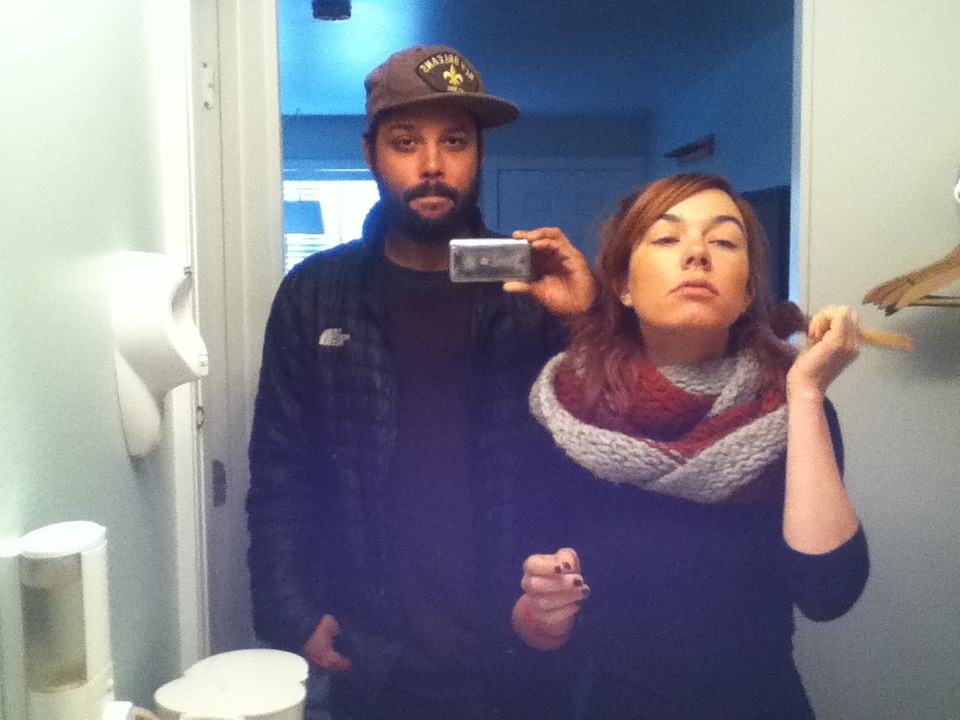 Maja and her film collaborator. (Photo courtesy of: Maja Holzinger)

A friend said to me recently that the best thing you can do to the world is really get to know yourself. That is why we’re in the business of dramatic storytelling. It can be a form of re-enacting your own psyche. I’m really interested in working with the experiences I’ve lived through. This new project is an extreme example. Playing with reality and blurring the line of what is made up and what is real makes #streetpunxofyangon a hybrid. Almost everyone plays versions of themselves, yet it’s fiction. The idea of transforming personal experiences into a narrative in the most honest distilled way I can is an ongoing source of inspiration and an impetus to be creative. Once you put something complete out there, you learn new things about yourself… from yourself. It’s best I can do.

What is your first step?

The excitement when a certain idea arises and ingrains itself indelibly – that is the first step. I can then use this spark to channel all of my energy into figuring out possible ways to make it happen. Without that initial moment of illumination it’s hard to start a creative process.

Often, after the initial surge of excitement, fear and doubt can come. I have this daily yoga practice, which is a practice in silencing the voice of doubt and fear inside me. If you start listening to the voice that comes from the place of love it starts talking to you. If you allow yourself to listen to the fear based voice, the loving voice feels betrayed and, in time, you can’t hear it any more. Showing up every day for yoga is my way of learning not to succumb to fear or negativity. 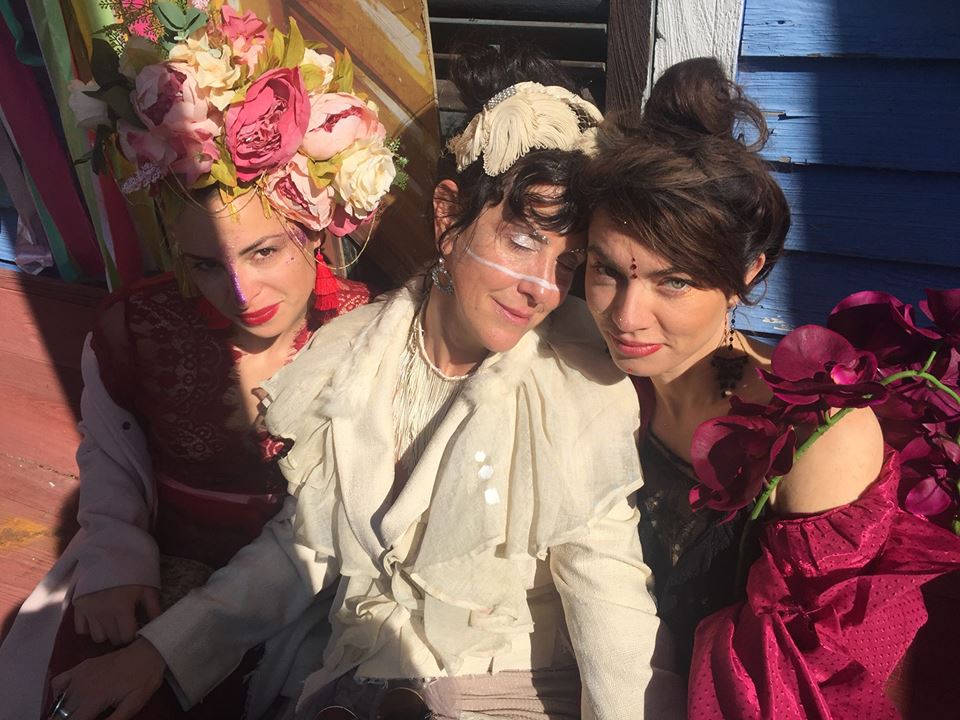 Maja and her female community (Photo courtesy of: Maja Holzinger)

Anything else about your film?

We just got our first investors on board, and it’s very exciting for us to move into production and travel to Myanmar again in November where part of the film takes place.  I cherish this time I get to have on this adventure with talented dear friends and collaborators. I know that in the end this journey we’ve been on… This is THE story. In film and in life.

Do you have a message for men who want to help/ be an ally?

My message is to look women in the eyes and listen to what the feminine beings of the world are saying. Put your ear to the earth and listen. You need to get your ear and heart in tune to hear. It’s not a screaming wisdom. There is no enemy to fight. It’s not a call to be a superhero. It is inclusive. The feminine voice in the world right now is helping men evolve so we can start moving past a dichotomy and towards unity. This includes unity within ourselves, between each other and with nature.

We’re sad it’s Wednesday: Photos from the Red Beans and Dead Beans on Lundi Gras 2020 It's just another Wednesday today, but that gives us time to remember all that we did on Monday and Tuesday. Here's a glimpse back with photography by Brandon Robert.

We’re sad it’s Wednesday: Photos from Fat Tuesday in the Marigny 2020 It's just another Wednesday today, but that gives us time to remember all that we did on Monday and Tuesday. Here's a glimpse back at how amazing life in New Orleans is with photography by Brandon Robert.

The CASSANDRA project: Maja Holzinger (Part I)
Artists
We use cookies to ensure that we give you the best experience on our website. If you continue to use this site we will assume that you are happy with it.Ok