Editor’s Note: New Orleans is more of a matriarchal city than most. Yes, patriarchy exists here, but New Orleans women have held influential positions in families, businesses, the community and the arts in numbers rivaling few other U.S. cities. So much of what makes New Orleans such a fabulous city is undergirded by the (sometimes unrecognized) hard work and sharp intelligence of its female residents. Exhibit #1: Oretha Castle Haley. #2: Ella Brennan. #3: Mahalia Jackson. #4: Joyce Montana. #5: Ruby Bridges. #6: Leah Chase. #7 +++: Pick anything you care about in New Orleans, and you can pretty much guarantee there’s a woman behind it, supporting the work through sweat and, sometimes, tears. This summer, we highlight a few of the city’s unique female voices. Next up in our series: Educator, innovator, counselor, CEO, and native New Orleanian Vera Triplett, founder of Noble Minds Institute for Whole Child Learning.

What: Founder and CEO of Noble Minds Institute for Whole Child Learning

Where: Noble Minds recently relocated from the Westbank to Uptown, in East Carrolton 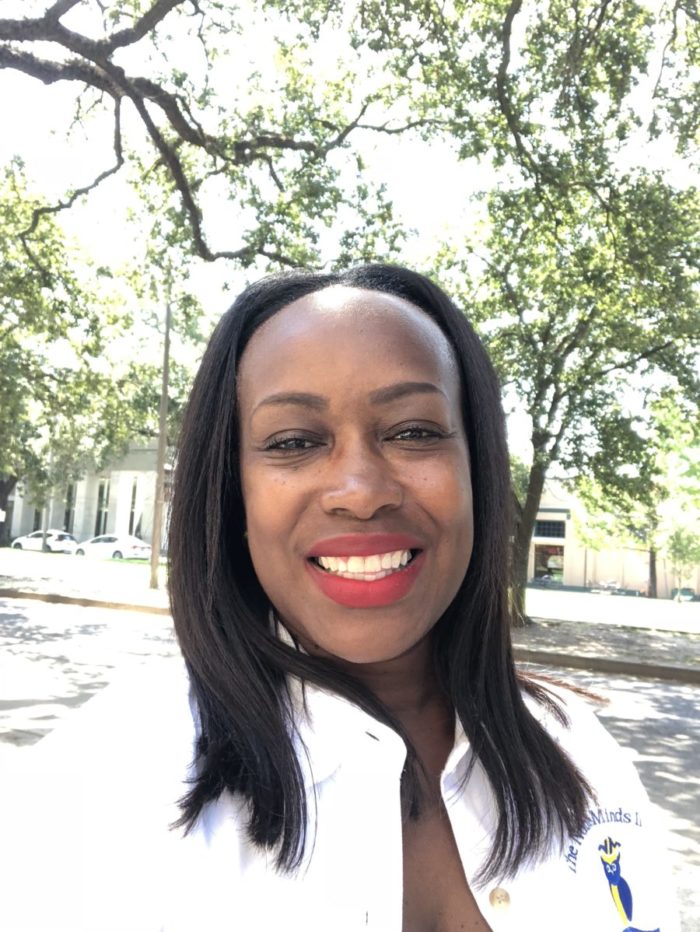 Noble Minds Institute for Whole Child Learning is the culmination of Vera Triplett’s decades of experience in education, counseling, and social justice work. The “whole” in “whole child learning” refers to the holistic approach Vera and her Noble Minds colleagues take to education, one that regards children as people with varying needs, not just bodies sitting at desks. Always in love with her work, Vera’s innovation and vision is fueled by a passion for education, which can be the “pathway out of poverty” for others as it was for her.

Nora: Tell me about Noble Minds Institute, in your own words.

Vera: Noble Minds is a project that came out of my many years of experience working at a cross section of mental health, juvenile justice, and education. I wanted to start a school that made use of all of those experiences and all of those civil rights issues. How do we meld those things together and make an institute for education?

Having been a teacher pre- and then post-Katrina—most of my experience with teaching being pre-Katrina and then with counseling post-Katrina—I definitely saw the need, when I was a teacher in the early and mid-90’s, for a more holistic approach to education. I really didn’t understand how to get there, but just knew, from my experiences with my students, that something needed to happen. I was very young when I started teaching, 24 or 25 years old, and I did not have any children of my own, so I didn’t have a ton of experience, but I knew almost immediately that I needed to know more in order to reach the kids that I needed to reach, which was actually what drove me to go back to school to get a Master’s degree in counseling and then a PhD.

Nora: Some of the other women I’ve interviewed for this series have told me about how a holistic perspective is important to their work. Have you noticed other educators in the city taking a similar approach?

Vera: Certain people have tried and are trying. I think what’s happened, particularly in New Orleans and especially in the post-Katrina paradigm, is this sort of silver bullet approach to education reform, which is the no-excuses, college-or-bust model. This worked for some kids beautifully, they graduated from high school, and they went to college, and they graduated from college, and they are now successful people and productive members of society. However, there was another group of kids that that did not work for because of a number of things, not the least of which was that it really ignored who they were as human beings and how the trauma of their everyday lives impacted the way they learned and presented themselves in the school environment. That had to be taken into consideration for that group of kids to be successful. I think people are realizing that now.

I think people forget that children are also human beings. […] We don’t even hold ourselves to the same standard that we hold kids to in school. When we make a mistake, we say, ‘Damn, I shouldn’t have done that, I’ll fix it.’ When a kid makes a mistake, they have to be suspended, they have to be expelled—we don’t put ourselves out of the house for three to five days after we do something wrong, but we will put a kid outside of school for three to five days. There has to be a paradigm shift for some people to get what others might think is obvious.

Nora: My sister went to a Montessori school for preschool. Noble Minds sounds a little Montessori-like.

Vera: I say to people that we are Montessori-like. […] My youngest daughter went to a Montessori school for nine years, so I’m very familiar with the Montessori system. For her, it was great, and it worked. My other children went to other kinds of schools that were better for them. I think that’s part of the reason why I’m so adamant about school choice, because not every type of school works for every child. We need as much diversity in the portfolio of schools as possible.

Nora: Do kids from all over the city attend Noble Minds?

Vera: Actually, they can come to us from all over the state. We’re a type-2 school, so we have kids from Orleans, St. Bernard, East and West Jefferson.

Nora: So they get to meet people they might not have otherwise!

Vera: Right. And in Greater New Orleans, people are very loyal to their neighborhoods and to their areas. So, a school like ours really does give children the opportunity to explore. When we were on the Westbank, we had people who had never gone to the Westbank; they’d lived on the Eastbank all their lives. Now we have people coming to our school on the Eastbank who’ve never been to the Eastbank. I like that we provide the opportunity to explore a city that you’ve lived in your entire life but that you’ve never explored entirely.

We also don’t ignore the importance of being outside of the building, so we take a field trip just about every other week. We call it our experiential learning component. We’ve been doing that since we were a summer camp. We would hop on a streetcar, or get on a school bus, or sometimes we would walk. It’s really important for kids to be able to apply learning, not just hear about things in a building everyday, but go out into the world and practice them.

Nora: What inspires and drives you in your work?

Vera: I love New Orleans. I love living here. I travel quite a bit in and outside of the United States, and I don’t think there is any place like here. So I’m inspired by everything about it.

In particular around education, what drives me the most is my personal belief that education is a life-changing, life-transforming thing. It’s certainly something that changed my life. I grew up very poor, and in my adult life, as a result of education, I have been able to be very prosperous and comfortable, and I’ve been able to provide a life and lifestyle for my children that I was not able to have.

I say this all the time, and people are probably going to get tired of hearing it—regardless of how you feel about our last presidential election and about the president that we have, I am convinced that the lack of education had a direct impact on the outcome of that election. However you feel about it, whether you think it was a positive outcome or a negative outcome, I am convinced that we have not done enough to help people differentiate between fact and fiction, and I think education also helps us to do that.

Nora: You must be so busy with the school—what’s your self-care practice?

Vera: I drink a lot of wine! Rosé is my favorite, but I will drink any white. It has to be obnoxiously cold and crisp and fruity. I like to meditate, I like to listen to music. I have a very deep faith base that I rely on to sustain and support me whenever I’m feeling overwhelmed or even depleted.

I think the most important thing is that I love this work and I’m passionate about it. It’s not work to me. That doesn’t mean that I don’t get tired sometimes, or frustrated. There’s never a time when I don’t want to do it. It’s crazy, but it’s true.