Women of the Crescent City: Alison Wild of The Standard Eating House

Editor’s Note: New Orleans is more of a matriarchal city than most. Yes, patriarchy exists here, but New Orleans women have held influential positions in families, businesses, the community and the arts in numbers rivaling few other U.S. cities. So much of what makes New Orleans such a fabulous city is undergirded by the (sometimes unrecognized) hard work and sharp intelligence of its female residents. Exhibit #1: Oretha Castle Haley. #2: Ella Brennan. #3: Mahalia Jackson. #4: Joyce Montana. #5: Ruby Bridges. #6: Leah Chase. #7 +++: Pick anything you care about in New Orleans, and you can pretty much guarantee there’s a woman behind it, supporting with work through sweat and sometimes tears. This summer, we highlight a few of the city’s unique female voices. Next up in our series: native New Orleanian and restauranteur Alison Wild.

What: Proprietor of The Standard Eating House with her partner Lana Banks

Where: 4206 Magazine Street, near Napoleon Avenue 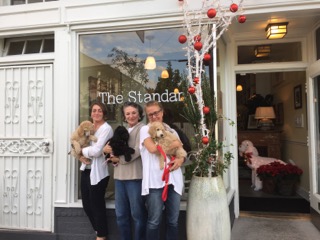 After spending her childhood in several different New Orleans neighborhoods, Alison Wild took off for Atlanta as a young adult, eventually putting down roots and establishing a life on her own, away from her parents. Twenty years and a restaurant later, Alison returned to her rapidly-changing hometown to spend time with her elderly relatives and soak up all the old stories, recipes, and culture she could. She and her partner, Lana Banks, opened The Standard Eating House in 2015.

Integral to The Standard’s ethic is preserving the older, slower culture of New Orleans—Alison’s grandparents’ culture, with its particular dialect and wandering sense of discovery that’s often lost now, in the age of highly-curated experiences and ongoing debates about authenticity. Alison is quick to acknowledge that she’s encountered nothing like what Leah Chase or Ella Brennan did when they began their careers in the predominantly white, male restaurant business; likewise, she has a keen awareness of how equity within restaurant culture has and hasn’t shifted since then.

On cultural change and women in the restaurant business

Nora: Is there a community of women restauranteurs in New Orleans?

There was an interesting thing that happened—there was a New York restauranteur accused of alleged sexual assault and harassment and two women have just signed on to take over and try and work on these two very successful restaurants in the shadow of these accusations. It’s interesting because there is a dialogue happening here in New Orleans, about the fact that there’s more criticism of the women taking over a restaurant that is dominated by a man who is accused of assault and harassment than there is on the other side. Women don’t support women, generally, in business, and men don’t support women in business.

Nora: I heard someone from the New Orleans Hospitality Workers Committee speak about the challenges of working in a restaurant the other day. With such strong power dynamics between customer and server, the kitchen and floor, the environment is flooded with the potential for harassment and abuses of power, especially for women.

Alison: I did my restaurant career in both the front of the house and the back of the house. Thank God we didn’t have cell phones back then. I never got dick pics or whatever, but that culture is prevalent. That level of harassment and people thinking it’s just a joke, to do that kind of stuff. The things that people deal with these days is what inspired me to open my own business.

Nora: This series is partly to do with the matriarchal culture of New Orleans. I think of restauranteurs like Ella Brennan and Leah Chase as pillars of this culture—I can’t imagine being even close to the same category as those women.

Alison: Well, you aspire to that. What they suffered in their lifetimes is thankfully something that I will never have to deal with. Race, religion, culture, Katrina kind of wiped out a big segment of that. Even though I was raised in a culture that kind of understood that, I fought against it within my own family. I would say something to someone about inappropriate behavior by a male relative, and they’d say, ‘Oh honey, that’s just what men do.’ So there was some level of it that we all dealt with. But nothing to the level of what Ella Brennan, certainly not Leah Chase, ever had to deal with, on any level. Although I can read a lot, I can never fathom what they dealt with. What it was like to watch desegregation happen in schools…even though desegregation happened in schools, watching an entire city unfold, into the seventies and early eighties, where [segregation] might not have been the law, but it was the law.

On demographic change, the older generation, and real authenticity

Alison: We opened the restaurant in Atlanta in 2006, and we closed it last year. When we opened The Standard three years ago, especially with my mother’s passing last year, we found it was was really hard to go up and down the Interstate, back and forth to Atlanta. You could do it in a day, but we found that as individual owners and participants of a daily business, six hours adds up to being a workday lost. So we made the decision to focus on this particular business.

Where we were [in Atlanta] was very much like Magazine Street. It’s a smaller enclave that is a walking neighborhood, and it’s experienced in the last ten years the kind of growth that New Orleans, especially in this neighborhood, specifically East Riverside, West Riverside, is starting to feel. Gentrification, people moving in, and tax values going through the roof, whereas long-term residents like my family have always had this little niche, and that’s what Lana and I thought we were moving into. But the last five years have really shown that people are taking advantage of the higher real estate values and moving away, selling their houses and realizing their own personal dreams. The infrastructure is changing here, very much so.

My biggest beef with this neighborhood specifically is that we have three of the most renowned restaurants in New Orleans, but people come from a hotel in a taxi or Lyft or Uber, go in, eat, get back in the car, and they go away. It’s not what it used to be when you just explored. Everybody gets on their phone and says ‘best breakfast,’ or ‘best burger,’ or ‘best oysters,’ and the only people who come up are the pay-to-play people. It’s not an organic thing. New Orleans was founded on, ’I got lost, I walked into this Mom and Pop place, I had the best night I ever had.’ It’s less authentic on the phone than it is if you’re just exploring.

Nora: Have you seen that change in your customer base? Perhaps people who haven’t lived here for a long time, or more tourists?

Alison: New Orleans is a tourism town. Historically it was based on tourism; it was part-time housing for people who were of European descent. […] So I don’t think that nature of New Orleans has changed much. But on the personal level, I’ve noticed that in the neighborhood, people who have lived there for twenty-five, thirty-five, forty-five, fifty years, they’re moving out, and they’re taking advantage of the real estate prices, because there could be another Katrina, and then the real estate could plummet, and they’re of an age where they wouldn’t recover from that, financially or emotionally. They’d rather move on.

Over the last thirteen years, the neighborhoods have completely changed. And who’s coming in is a different culture. […] I think what’s changing is that we don’t have the neighborhood infrastructures that we did before, and part of that is post-Katrina and part of that is cultural change. And it’s gonna happen, no matter what. There’s always gonna be that level of tourism, because this is a city built on tourism. This is the greatest city in the United States, with its own architecture, its own music, its own art, its own language, its own food. Transition is bound to happen. But there’s a culture that, post-Katrina, has just fallen by the wayside.

Nora: Does that make you sad? Even if it is inevitable?

Alison: I miss mostly the older community, because there is a dialect and a sense of humor that is being lost. There are several performers who are able to showcase it, in humor and entertainment, cabaret-style. One of them is Ricky Graham. He lives in this neighborhood, on Prytania. He usually performs at Café Istanbul, with this cabaret-style performance. And the dialect and the humor that he performs, are very much my grandparents and their community and not so much on my parents. When I travel, people say, ‘You’re from New Orleans? You don’t sound like you’re from New Orleans.’ My parents were very specific about not sounding like you’re from New Orleans. Because “Yat speak” and that kind of dialogue was not considered successful. […] You want to be respected, and sometimes an accent puts you in a category. The first time I saw Ricky Graham, I just cried. It wasn’t because it made me sad—it was very humorous and very loving and very respectful of the culture. But they’re gone. But [Ricky Graham’s performance] is a wonderful tribute.

Women of the Crescent City: Shirani Rea of Peaches Records
Entrepreneurs and Innovators