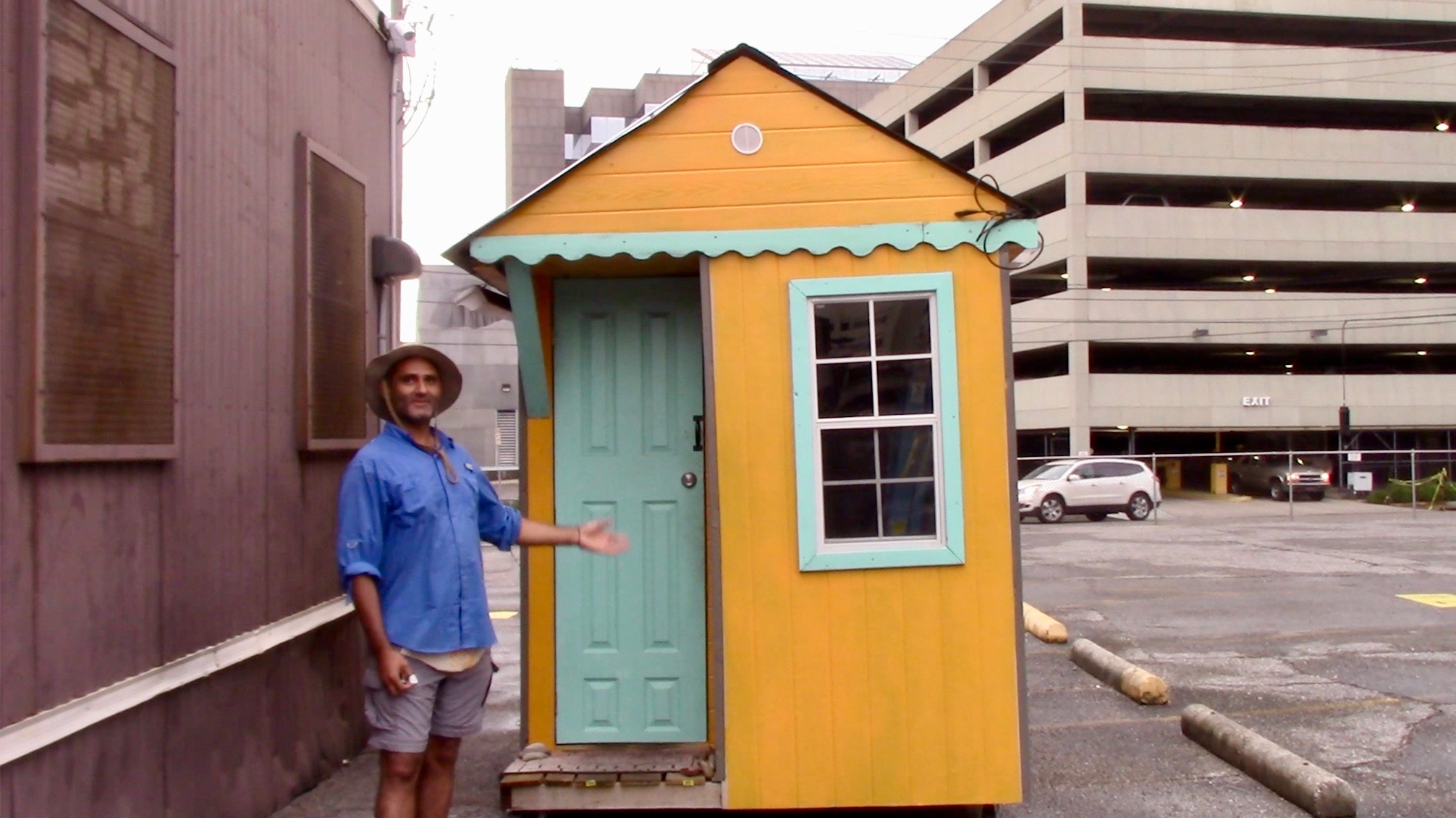 Haiyan with the tiny house

New Orleans is a city of innovative non-profits. Since Hurricane Katrina, NOLA has seen a myriad of do-good organizations sprouting about the city. A city so loaded with dreamers, there’s a non-profit, Propeller, dedicated to launching non-profits. In 2016, The National Center for Charitable Statistics counted 2911 non-profits in the city of New Orleans.

Santosha is one of these dreams.

The vision: to build a tiny house village where formerly homeless or housing insecure folks live in community.

Before Santosha’s dream was articulated, the organization’s founder, Haiyan Khan, experimented with building a tiny house in his free time. As an avid city-walker, Haiyan was familiar with local unhoused communities, so when his first tiny house was complete, he rolled it to the I-10 (highway where many of New Orleans unhoused camp out) and offered the tiny home as a gift to a homeless friend.

Since those early days of individual effort, Santosha has become a collective. Like a magnet, the organization draws in people from numerous sectors of the city: currently and formerly homeless folks, architects, doctors, social workers, artists, business professors, and meditation leaders. During July of 2017, a Tulane Medical School professor hosted Santosha’s first community dinner. Those without homes were shuttled to the meeting, and so gathered a group of about 40 people, curious and eager to explore what this community could mean for them; what it could mean for our city.

After this meeting, I had my first conversation with Haiyan, where I explained my hang-ups on getting involved with Santosha. I shared my yearning to make media and how I had shown up to the meeting with that dream as my focus. I felt it would be exploitative to get involved with the organization in pursuit of fulfilling my own dreams.

I confessed to Haiyan my privileged upbringing and unfamiliarity with financial hardship. Haiyan reassured me, “I don’t need to know where you’re from, I want to know what’s in your heart.” He explained his belief that for the sake of creating a sustainable community, every member needed to feel they gained something from participating in Santosha. Others echoed this belief: Santosha is first and foremost a community, not a charity. Donors are needed and valued, but the organization is designed as a collective of people on a journey of purpose together.

Today, almost a year after that first meeting, Santosha’s story has unfolded in ways the organizers hadn’t imagined. In August 2017, Santosha acquired an acre of land in a New Orleans East neighborhood called Plum Orchard. The owner of this overgrown lot offered the land to Santosha without cost for one year, with the option to return the land in that time. With dozens of volunteers, the Santosha team spent the next six months devoting thousands of hours to cleaning the lot, preparing the ground for a village, and preparing the community for village-life.

While Santosha grew, so too did the voices of the Plum Orchard neighbors, making clear their desire to get Santosha out of their neighborhood. Santosha’s organizers hosted a series of community meetings, hoping they could connect with the neighbors and build a solution together. The Santosha community envisioned neighbors serving on a leadership panel that would vet individuals who wished to become Santosha residents.

Months went by, and conversations kept going the same way. Santosha asking: What can we do to partner with you? Neighbors insisting: We don’t want it, no matter what. Neighbors cited their numerous concerns: Santosha is too close to a school… too many homeless people have mental illness or addiction… property values will decrease… it’s not right to have strangers coming in and filtering through the neighborhood… and Santosha would be better if they were doing something else, like helping homeless people get a job.

In March 2018, Santosha returned the land to the owners after one final meeting with the neighbors. A week later, Haiyan left town on a Peace Walk from New Orleans to Sedona. Returning the land happened right after the unexpected passing of Haiyan’s mother, and so Haiyan left on a personal rite.

Without Haiyan around, many of the regular features of the community have been put on hold. No one has hosted a monthly community dinner, nor weekly wellness meetings. Some are skeptical the community will continue.

In May 2018, I connected with Mark — a man who was homeless for over a year and is now living in one of the tiny houses built by Haiyan. Mark has kept the tiny house beautiful and even carried out some renovations on the building. While Mark has been discouraged by the absence of meetings, it didn’t seem to me as though all community aspects have fallen by the wayside. Mark informed me that within the week that I saw him, he had checked in with another formerly homeless Santosha member along with an organizer.

From my perspective, Santosha continues to fulfill its purpose as an authentic community. Real communities require the work of the community members (not just a single leader) to remain intact. The philosophical underpinnings of Santosha are paradigm-changing for many. Santosha aims to be a community filled with people who involve themselves out of self-care, not self-sacrifice. Will this organizational structure sustain Santosha for years of tenacious work as the group climbs towards the village of their dreams, or will Santosha dissolve in the organic way so many communities and dreams do?

Meet some folks from the Santosha and Plum Orchard communities in the videos below, or to see the full story check out this documentary I made as I followed Santosha’s development.

Lori, a Plum Orchard resident, shares her side of the story:

Aside from The Grammys: A look at the Recording Academy on a local level
Services Nonprofit

(Video) A look into the lion: The next generation carrying the torch in New Orleans
Heritage and Folklore