A Tulane degree: A supportive campus for individual perseverance

This sounds very similar to a story written by me titled Autism: The Gift with No Return, which was published by NolaVie three years ago. I did my very best to give that gift of autism back to its source, but I could not find any takers. Even an Associated Press story highlighting my life and accomplishments could not find its original owner or the being that delivered autism to my doorstep.

So, unfortunately, I have to continue with the travails that the gift of autism applies to me daily. However, the most wonderful gift that I have or ever will receive will be given to me on May 19, 2018: a degree from Tulane University.

I began my Tulane experience in the fall of 2013, excited yet apprehensive of starting a new school. This is certainly not unique, as most kids feel this way. But for me, someone with autism, the nervousness is greatly amplified. The Goldman Disabilities Office at Tulane did a wonderful job by introducing me to my professors so that I could acclimate to their classes and they could acclimate to me. It was the first time that any of them had taught someone like me, a nonverbal person with autism.

Meeting new people has always been a difficult task for me, as the gift of autism is very possessive and often refuses to let me make friends with others. Autism can intimidate people and prevent them from interacting with me. I can be scary-looking at times, with some of the involuntary sounds or movements that I make. My high-school friends knew who I was because we had been in classes together since the third grade. They would say, “That is just Ben.” I had no idea how my Tulane classmates would react to me, but I must admit that they were very welcoming, as after all, they were also new to one another and to the city of New Orleans.

In my first semester at Tulane, I figured that history would be my course of study, as it was my favorite in high school. I even had earned college course credit from AP United States History, so I thought I was off to a good start. Then my gift of autism interfered with my ability to reference with the Chicago Manual of Style, the reference system utilized by historians.

“Ben, the comma is in the wrong place or there should be an indentation on this line,” was a sample of comments from professors. Unfortunately, I lost points for this, and I just could not understand why this mattered.  I was frustrated by what I thought was an item so frivolous that I began to question myself and why I was going to college. Dr. Meg Keenan, my professor in a class on Tudor England, suspected that I was annoyed and upset.

“What is bothering you Ben?” she said to me after class one day. I typed nervously, “I don’t feel like I belong here. I feel like a freak as people stare at me, and I bet they think that I should not be here as well.”

Dr. Keenan responded immediately to what was essentially my call for help.

“Ben, you belong here at Tulane. You have all of the required qualifications as your schoolmates. I have no doubt that you will excel as you have the intelligence to do well.”

This little pep talk really kicked me in the butt, allowing me to put my gift of autism aside and continue my education at Tulane. 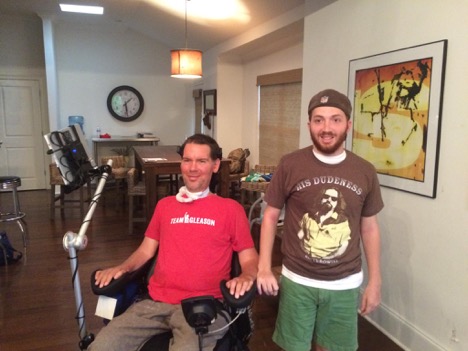 A conversation between Steve Gleason and Ben Alexander was conducted with machine technology and human emotion. (photo by: Ben Alexander)

The spring semester of 2014 was the one when I found myself and figured out what I wanted to do in my life — and what I could do with the albatross of autism wrapped around my neck. It was a creative writing course that stimulated my brain and allowed me to introduce myself to the world rather than write essays on the past that have no relevance to what ticks inside of me.

The class began with an assignment from Professor Thomas Beller: “Write about an encounter that you had with the police.” I am sure that most of my classmates’ encounters with the police were probably associated with drunken disorders. What kind of encounter with the police could I, a boy with autism, write about? I had the perfect story of a time when I ran away from home as a child and found myself in my grammar school, standing face-to-face as a naked 8-year-old nonverbal autistic boy before an imposing Jefferson Parish Sheriff’s officer. The big tall cop who had the appearance of Darth Vader was staring right at me. He had no idea what this little naked autistic boy was doing in this school. “What are you doing here, son? What is your name?” Of course, I could not answer him. So, my autism took over and I started to flap my hands in nervous excitement.

This story, which I titled The Great Escape, intrigued my professor, as he was working on a book about J.D. Salinger with the same title.  He really liked what I wrote, saying, “You have now set the bar high.” Professor Beller did not allow me to use the gift of autism as an excuse. Instead, he encouraged me to utilize it and break it apart in my writings, to inform my readers what my world is like. I carried his advice through the rest of my course load at Tulane, as I examined myself and reflected on my experiences with my battles with a disorder that has taken away my speech and prevents me from the typical everyday social interactions that someone my age should have.

A highlight while a student at Tulane was an opportunity to meet one of my childhood idols, Steve Gleason.  During my years at Tulane, I often expressed frustration over the havoc that autism and its fellow fiend would play on me. So, in order to make me understand that I was not the only person facing difficulties, my father, with the assistance of a friend, arranged for me to meet Steve. I wanted to know how he felt about losing his voice, when I never really had one. Steve was very gracious in answering my questions, and I think that I may have had a positive effect on him.  Following our augmentative conversation, Tulane published An Augmentative Conversation on February 23, 2016.  The opening paragraph set the scene:

“It was a meeting between two men. Neither one could speak. They utilized modern computerized technology to convey their innermost words. One was a 38-year-old, former professional football player. The other was a 21-year-old college student, a nonverbal person with autism.” Our conversation brought out a lot of emotions from everyone who witnessed the meeting between us.  His devotion to bringing attention to ALS made me wonder what should I do to bring attention to autism. The best way for me to do this was to continue with my pursuit of a degree from Tulane University.

So, what does having a degree from Tulane university do for me?  It says that despite having autism, I can be like anyone else.  Furthermore, I am validated as a writer by one of the most prestigious universities in the country. That removes the doubts of naysayers who have questioned whether a person afflicted with autism can really do the work.

To those of you who have supported me, I say a big thank you.

My 4 yr old son has non-verbal autism. You have given me so much hope for him! You are amazing! Congratulations on receiving your degree!

Autism: The gift with no return
Extra/ordinary