Artists In Their Own Words: Julianne Siadek 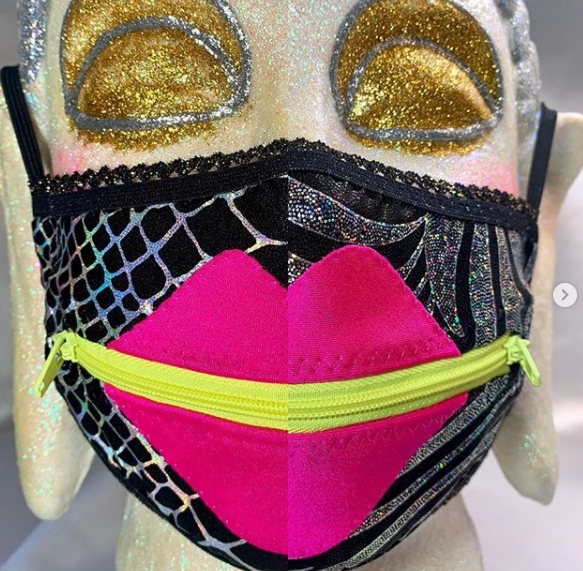 What to know: She is embracing the Nola spirit and making custom masks to sell on her ETSY account.

Q:  What show/movie/or song did you watch or listen to repeatedly when you were young?

A: Album was all of Amy Grant’s Heart in Motion. I have it in my iTunes now, and I pull it up every once in awhile when I’m hanging with my ladies.

I love Return to Oz. It came out in the early eighties debuting Fairuza Balk, and she’s so wild in Return. It tells the story more realistically than the MGM original, and was more of a synthesis of a few different books from the series. It doesn’t have the glitz, but it still has the dreamy quality. It’s sublime and beautiful, and it also scared me to death when I was a kid, but I loved it.

And I actually met the man who made the puppets for that movie, he used to camp with us at Burning Man. It was like finding out that Santa Claus is real and that he lives next door.

Q: What has been one of your biggest ah-ha moments?

A: Just recently I was doing some research on a new product I’m working on, which I can’t talk too much about because I want to get a patent for it. And I was Googling and wondering if this thing was already in existence, and the lyrics from song that was playing went, ‘I saw everything for the first time.’ My thought of this hasn’t been done before and that lyric came out of the speaker at the exact same time. That was an ah-ha. [It was Temptation by Matthew Dear]

It’s interesting that I don’t always make the same things over and over. There’s no one thing that people request, and nearly all of my work is custom. Everyone has their own dreamed-up garment they’re looking for. Onesies are always popular. This past summer I made one for a friend who used to be a Marine, and now he’s trying to divest himself of the more aggressive characteristics that he picked up from his experience in the service and live with an open heart.

I used his flight suit from the military as a pattern. We had this idea that he is a Love Thor, used to be a grizzly Marine and is now a cuddly Care Bear. So the costume is the same structure as his flight suit – the same pockets designed for ultimate utility – but made out of swirly maroon faux-fur, and then in the center patch there’s a radiating golden heart. That was one way I could take the basic onesie and make it him, and we bonded a lot in the process. I like to help people dress up as themselves, and finding that true self they can dress up as is definitely a shared ah-ha for me and my client.

Oh, and, when I’m working with color. If I’m putting fabrics together and they match – not monochromatically but as in they look good together – then they get brighter, light up and start to dance with each other. That’s a very ah-ha moment.

Q: If you were going to make a how-to video on something that no one else can do, what would it be?

A: That’s a catch question because I would not make that video. That would be a secret. If I were dead, though, that would be more of a ‘how to get to my treasure’ video. I could give them a how-to video on how to find the stolen glitter.

At the end of the treasure hunt maybe they could create a diorama of me. I could spend my whole life collecting and then use those artifacts as the treasures. I guess that’s basically the equivalent of going into your grandma’s storage unit and finding out about her life.

Or I could make something completely fake. It’s not actually me, it’s just a persona that I’ve collected and put together. Well, that they would put together based off the how-to video.

Q: What abstract idea would you like to see manifested in a physical form?

A: Well, right now I’m actually working on my body. This costume that I’m wearing [she pulls up her shirt to reveal a bright pink body suit with a button spinal cord and accurate bone placement] is an embodiment of me. I have spent the past year getting my body in shape through yoga in order to make this costume. I needed my skeleton to protrude as much as possible in order to get my body traced. I found out I have two floating ribs.

My mother used to say that people who were sarcastic have black hearts, so that’s why there’s the black velvet heart in the middle. I didn’t go full costume today, but I have gloves that will represent a nerve issue I have going on in my arm, and the hands of a maker. And this is for my head.

[She pulls out a domed artifact with lit pieces of what look like giant iridescent macaroni and puts it on her head. It’s her brain. And it lights up.]

I came up with a new level of the costume today, I’m going to use my skeleton for some sort of Glitter Reaper performance art to collect souls at Burning Man. It’s going to be a beautiful Death. The first time I did Ayahuasca, I had rainbows injected into my blood. I was not a rainbow person before. I had this very clear vision, though, and now I have rainbow blood.

Julianne Siadek is a native New Orleanian, and you will often find her sewing and creating like mad in New Orleans all year round. To see her work and learn more about Julianne Siadek, you can check out her website, her shop, her instagram  and you can email her for custom work at: juliannelagniappe@gmail.com.