Last Saturday, a great Christmas miracle unfolded in our household… We were on track for an early departure to Teddy Bear Tea at BB’s Stage Door Canteen. If you have a toddler, or have ever met a toddler, you know that this was a big deal. That is, until we reached the last step of getting ready: shoes. You know the ones. The dress shoes that are worn exactly three times before they are too small. The ones that go perfectly with the sparkly Christmas dress purchased specifically for Santa photos. Or they would have, if the right shoe had been located.

So out the door we went, now ten minutes late, in a sparkly red dress and a pair of dirty tennis shoes. On the drive downtown, I braced for the eyebrow raises and subtle-not-so-subtle mom shaming. 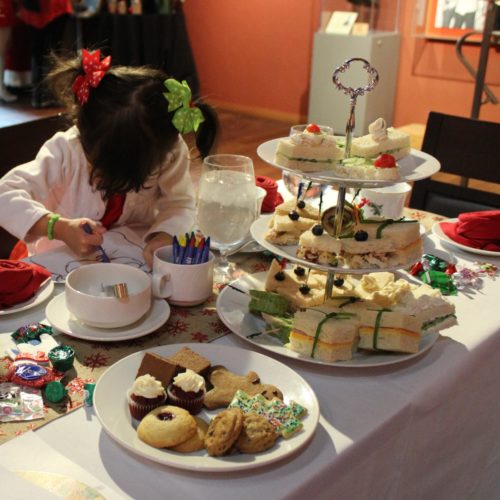 The coveted and feared desserts, all depending on perspective (photos by: Kim Frusciante) 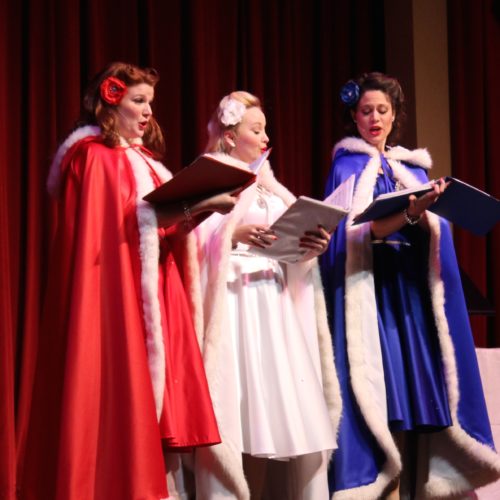 The sweet sounds of the singers (photos by: Kim Frusciante) 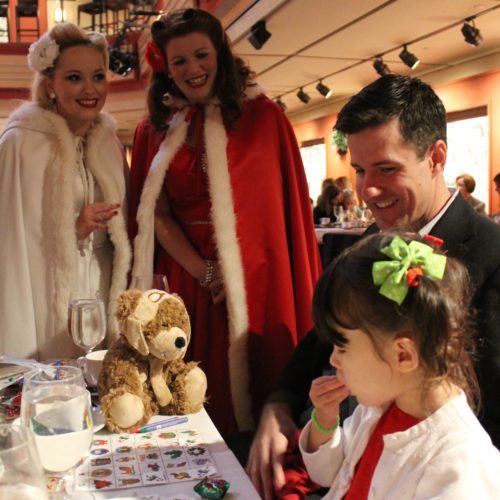 The last teddy bear tea we attended was packed to the gills with girls sporting perfect ringlets and moms in high tea attire fit for the queen. Outside of BB’s Stage Door Canteen was more casual, even calm. No moms frantically brushed their daughter’s hair. It all felt like less of a production and more like a pleasant way to spend a Saturday morning.

The rest of the program had the organization of a military base with the whimsy of crayons and coloring sheets, Christmas bingo, and a dance party with Santa & Mrs. Claus.

The harmonies of the Victory Belles were sweeter than your grandmother’s cookies. Though the caroling was a great idea, the adults would need way more booze to really get into it. Edith getting down with tea and teddy (photos by: Kim Frusciante)

Ultimately, the warmth, and genuine care of the staff made this a stand-out event. When Edith nervously approached the stage for story time, Mrs. Claus herself grabbed her hand and helped her up the stairs. When Edith had a full on meltdown during our first attempt at a picture with Santa, the photographer was patient and kind. In between tries, her old pal Mrs. Claus gave Edith a pep talk. (Surely Mrs. Claus wouldn’t marry a scary man!) When Edith finally overcame her fear, servers, volunteers, and performers congratulated her on her bravery. By the end of teatime, Edith was so happy that she was jumping up and down on the dance floor. Good thing she was wearing comfy shoes!