Mixing across the Atlantic: The d’Ernevilles and today

Pictured is the island of Gorée. The same island that Charles Jean-Baptiste d’Erneville was stationed at in 1789. Gorée Island, 1728, as shown on www.slaveryimages.org, based on Jean Baptiste Labat, Nouvelle Relation de l’Afrique Occidentale, A New General Collection of Voyages and Travels

New Orleanians may not argue about a lot, but there are a few words, misused words, that can make our blood boil. One of them is “creole.”

Creolization generally is a word used to describe cultural mixing. Many scholars have different interpretation for the definition of the word. For example, in Paul Lovejoy’s work Identities in the Shadow of Slavery he describes that the process of cultural mixing must have an African aspect or entity to be considered Creolization (1). There are also other scholars who argue that Creolization is a process that can only happen in the Caribbean, becoming even more specified.

I agree more with Robert Baron and Ana Cara’s explanation that Creolization is a process that is not restricted by race and boundaries (2). I feel that Creolization can occur in any region with any different groups of people as long as there is some form of cultural mixing occurring. This process of creolization is what happens in both Senegal and New Orleans when we see African and European culture mixing.

A typical story is one like Pierre Henri d’Erneville, who was a French man born in Normandy on February 2, 1711. He was an officer in the French military, came to New Orleans, had sexual relationships with an enslaved women, and together they conceived children that then also conceived children.

One of the generational offspring, Charles Jean-Baptiste d’Erneville, was one of few people during the eighteenth century who travelled to three of the continents that make up the Atlantic World. His experience in Senegal is unique because of his background as a Louisianan. He experienced both racial mixing in New Orleans and Senegal, through his own and his father’s relationships. (5)

Interracial relationships were not uncommon during this time, even though they were looked down upon by society. In colonial Louisiana, the white men largely outnumbered the white women, in part because of the hostile climate that brought on yellow fever, cholera, and malaria to name a few. This was one (although colonization, power, and nonconsensual arrangements should not be overlooked) contributing factor to the large amount of sexual relationships white man had with women of color. Pictured is a free woman of color from 1844. Many of these women of color had life long relationships with men of European decent. Free Woman of Color, New Orleans, 1844, as shown on www.slaveryimages.org, Published in E.D.C. Campbell and K.S. Rice, eds., Before Freedom Came: African-American Life in the Antebellum South (Univ. Press of Virginia, 1991)

Many European men forced enslaved women into sexual partnerships, and there were also those who developed intimate relationships with free women of color. Interracial marriage was illegal in New Orleans at the time so many of these European men took free woman of color as partners rather than wives. Commonly, these relationships were looked down upon by greater French society. (6)

New Orleans gained a reputation as the city of bachelors, because many men died without technically marrying anyone. These relationships created mixed race children that, in many cases, the white fathers would claim as their own in birth records. In order for white society to try and understand racial mixing, many terms were created in an attempt to give a person value based on how white they were perceived to be.

Terms like mulatto, quadroon, white, black, etc. were placed on a child’s baptismal record, and in many cases the same parents would have another child and when the second child was baptized that child would be assumed to have a completely different ethnic make up than their sibling. And now, we move to Senegal.

In Senegal, racial mixing occurred but it manifested in an alternate way making different implications for society. White men came from Europe to Senegal in hopes of getting involved in the lucrative slave trade market. These men originally tried to find a way into the market themselves but realized this was not applicable.

An organized system had already been made by locals to kidnap Senegalese from the interior of the continent or castrated by women called signares. Through this process men would travel through the Senegal River system to the interior of the land. There they would gather small groups of villagers that would be taken back to the river. The Senegal is a very shallow river so labor was necessary to pull boats full of captive slaves through the mud all the way back to the coast.

These laborers were called laptots, and they themselves were enslaved; although, sometimes they were given a wage for their work. After returning to the coast these captives would be stored until there were enough people to send out in a ship to the New World.

These signares, who were upper class women who were usually educated and usually spoke many languages, controlled many of the aspects of the slave trade in Senegal. They were very much personally involved in this process. The European men made business partnerships with these women through marriage. These marriages were considered marriage á la mode du pays by the French, which means “marriage in the country’s fashion.” The arrangements were usually temporary and only lasted as long as the couple stayed in the same location. The ceremonies were typically done in traditional Wolof customs from the mainland of Senegal. (8) 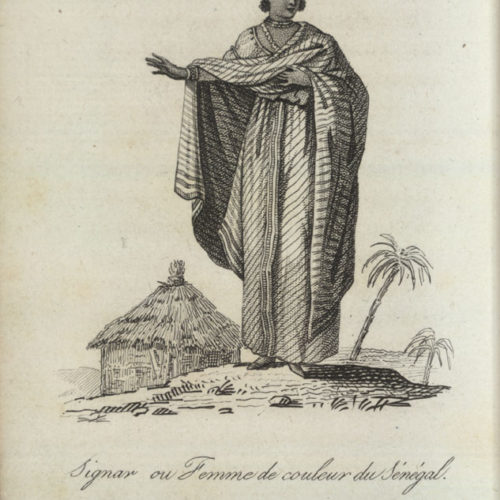 This image shows a signare. These women held a lot of power in Senegal as they controlled many aspects of the slave trade. Many European men married these women to create a partnership in the slave trading business Free Woman of Color, Senegal, 1780’s, as shown on www.slaveryimages.org, compiled by Rene Claude Geoffroy de Villenueve and sponsored by the Special Collections, University of Virginia Library 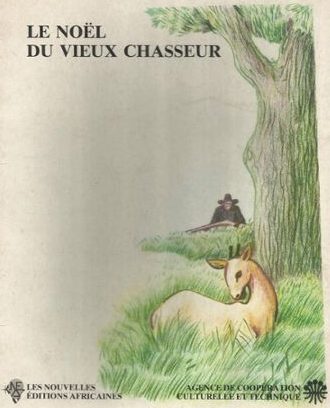 Now, let’s get back to the d’Ernevilles family. Charles Jean-Baptiste d’Erneville’s experience has made a lasting impact on the Senegalese community. Many of his children grew up to be very influential people. For example, his and Cathy Miller’s son, Nicholas, became the mayor of Saint-Louis in 1851 and also became a successful businessman, founding a trade house. His other two sons married very well off women whose fathers were both former mayors of Saint-Louis. (5)

Today the d’Erneville family name is still very prominent in Senegal. For example, Annette Mbaye d’Erneville is a prominent journalist. She was born in 1926 and studied in France. After her education, in 1963, she created the magazine Awa, the first magazine for African women in the French world.

Her son Ousmane William Mbaye is a filmmaker who created a documentary about his mother titled Mére-Bi . The film discusses her as a pioneer in the journalism field in Senegal and her involvement with activism for women’s rights. (10)

A family who was so prominent one hundred and fifty years ago is still making a lasting impact in that same community. It’s not a pretty story, it’s not consensual story, and it’s not a love story, but it’s a story we need to face.

7. Emily Clark, The Strange History of the American Quadroon: Free Women of Color in the Revolutionary Atlantic World, 2013

Clark, Emily. 2013. The Strange History of the American Quadroon: Free Women of Color in the Revolutionary Atlantic World. University of North Carolina Press.

Mixing across the Atlantic: The d’Ernevilles and today
Race and Ethnicity