New voices in New Orleans: How one nonprofit, ReFocus, is changing the New Orleans perspective

It is the second week of October and New Orleans is still muggy. Although the heat of summer has somewhat dissipated, the warmth of it lingers slightly. I cannot imagine being outside in that heat for much longer than half an hour, but there are people in this city who spend the entire day out in this air, exposed to the elements.

I am unsure of the statistics but I do know that, as a New Orleans resident that I witness homelessness every day.

There are dozens of organizations and government entities dedicated to solving homelessness and they work hard to do so, but something, just does not seem to be working.

ReFOCUS, through the launch of the MyNew Orleans Photo Project, the local adaptation of the international MyCity Project, it trying something new. ReFOCUS is new non-profit, one, which implements Photovoice projects.

As one of the founders of ReFOCUS, Heather Milton says, “We can design, with them, what the theme and the message of the photovoice project is. We can use this, not just for public awareness, but also for advocacy. With the MyNew Orleans Photo Project we hope to raise public awareness of the issues surrounding homelessness and awareness around what programs work, so those programs can gain more traction and hopefully more funding because we obviously don’t have enough of those programs and enough of the funding.”

I had never heard of a Photovoice project, or I thought I hadn’t, I just didn’t know it had a title. The Photovoice methodology provides cameras to marginalized groups of people with the goal of gaining a new perspective on the issues, policies, and lives of those groups, from the perspective that knows it best, their own. Milton told me, “I want people to see the amount of creativity that comes out in a project like this. Everyone deserves the chance to be heard and everyone deserves having someone to listen to them in a public space. These people should be seen as existing in our community, not on the periphery.”

Through the exhibition, the MyNew Orleans Photo Project, up at the main branch of the New Orleans Public Library, these homeless members of our community are being seen and heard.

Rows and rows of photographs are clipping on string, each one accompanied by the name of the photographer, the title of the piece, and a quote from the artist about the image they shot. Some depict recognizable New Orleans scenes; a red street car, the children’s train that runs through City Park, Bayou Saint John on a sunny day. Some are more personal with titles like Friends from the Shelter and depictions of graffiti that read, “we are all suffering from some form of poverty, some are morally poor.” 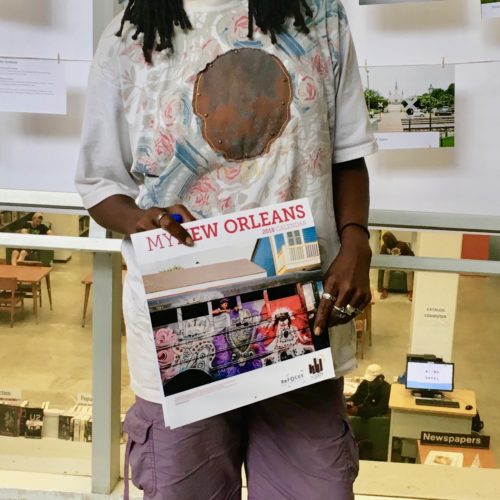 Hope Magraff with her calendar featuring her photo (photos by: Lillian Alford Patterson) 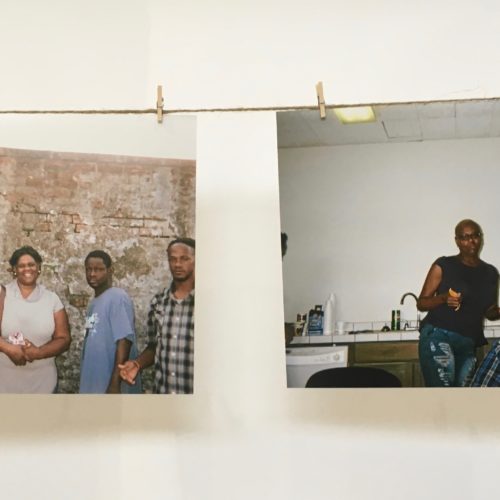 Friends from the shelter by T. Bear (photos by: Lillian Alford Patterson) 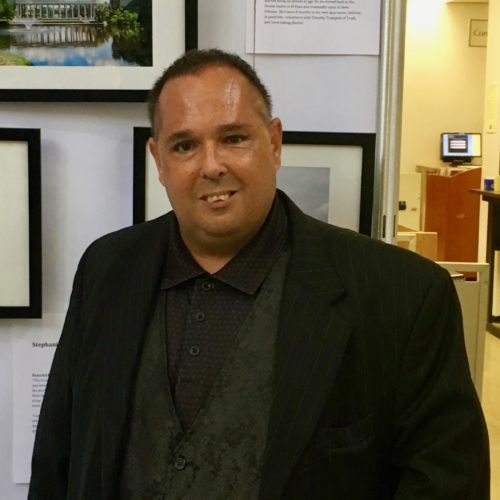 At the end of the hall there are fourteen framed photographs. These are the submissions selected for the ReFOCUS calendar; twelve photos for twelve months, one for the cover and another for the opposite side.

I spoke with a few of the photographers about their work. They all had different stories about their unique shot, why they took it, and what they liked about the image, but what I felt from all of them was a distinct pride in the work they had submitted and a joy in seeing it hung.

Louis Herrera explained, “I found out about it [the MyNew Orleans Photo Project] at the Harry Thompson Center and I was homeless for about three years and right towards the end, they came in with the pictures and told me they had this contest and I loved it and wanted to raise awareness so I entered the contest.”

Herrera’s photograph captures the arch of Armstrong Park from Saint Ann Street. On the periphery are pastel painted homes. A pigeon is caught in motion, flying, in from the left. He tells me “This photo represented to me, time travel. I was imagining what is looked like in the past, in a city that is so fast, and I just imagined in the past everything would be slowed down.”

There is something nostalgic in Herrera’s photograph. There seems to be a bit of the past in many of the photo’s shot, like in Nick Forrest’s image of the Saint Louis Cemetery. “The scenery and architecture, they are very old, and you see the crosses everywhere. It was a good moment, it made me feel good.”

There is a sense that snapping these photos brings an intense joy to these folks. Hope Magraff was beaming when she told me about her photograph of Cinnamon Black, the Second Queen of the Fi-Yi-Yi and the Mandingo Warrior looking out of the Iron Horse Riderz Bus, “that was my very first picture. And I said, well this has got to be a picture. We had fun with it.” Magraff’s photograph was chosen for the cover of the magazine, and it captures an image that, I think, is distinctly New Orleans.

While this exhibition release is unique to the crescent city, it is important to know that the MyCity Project is in fact a global network of organizations. Each organization is creating ways in which these people affected by homelessness can be creative and share their unique story. In doing so, each organization hopes to move toward finding solutions to homelessness. A central part of finding solutions is to include those most affected, the homeless.

New Orleans is the first city in the United Sates to get involved with the project. The founders in New Orleans developed their project for the conditions of this city. In London, where the MyCity Project began, one location was designated to hand out cameras to those affected by homelessness.

This did not work for the New Orleans chapter. The co-founders Heather Milton and Elisabeth Perez found that they would have to work with various community organizations—who today are their partners—to reach the number of people they wished. These organizations include the Covenant House, the Harry Thompson Center and the New Orleans Public Library, among others.

As the organization gains more traction, Milton and Perez are hoping to move toward more centralized handout and return locations. During the last year, the library has been essential to moving the organization into a more centralized sphere. As an environment that is welcoming to the entire public, the library is perfect as an open meeting ground.

The MyNew Orleans Photo Project is funded solely by proceeds from calendar sales and small donations.  If you wish to purchase calendars or support  ReFOCUS and to the MyNew Orleans Photo Project, please visit their Facebook page, home page www.refocusdialogue.com or their crowd funding page https://igg.me/at/1O6-up-qcBg, watch the video, and learn a little more about how these folks are altering the perspective on New Orleans.